What is the Test in Norwegian C1 – higher academic level?

Who is this test for?

Test in Norwegian C1 – higher academic level tests Norwegian language at a very high level. The test only contains tasks at the C1 level, and candidates are either awarded C1 or do not pass the test.

We recommend that you talk to a teacher who is very familiar with the highest levels to determine the right test level for you.

The test only contains tasks at the C1 level.

There are some tasks in both tests that measure multiple skills at the same time.

About the test in listening comprehension and written production

There are two tasks in this test, and the whole test is taken on a computer.

Task 2 is a purely written task. There are two different tasks to choose from. You will be presented with an issue in the tasks. In your written answer, you will briefly present the case, form an opinion on the issue and argue your point of view. You must write between 300 and 400 words.

You have a total of two and a half hours to complete the tasks. Remember to read the information and instructions for the tasks carefully.

About the test in reading comprehension and oral communication

In the first part, you will read three texts on a computer or paper and prepare answers to two of the three tasks you are going to talk about when you go in to the examiner. You have a total of 30 minutes to read and prepare.

Remember to read the information and instructions for the tasks carefully. More information about how to do the tasks is provided here. You can make notes on a sheet of paper you will be given by the test supervisor when preparing to answer the tasks.

Task 1: You must read text 1 and prepare to verbally summarise the text. The summary should take around five minutes.

Task 2: You must read text 2 and 3, and prepare a brief presentation of the points of view that emerge in these texts. You must then state who you agree with most, and argue your point of view. You can talk for around five minutes.

The second part of the test is the oral test.

Once you have read and prepared answers to the tasks, you will be called in by the examiner (test supervisor). You will then present the answers you have prepared to the first two tasks. You can use the texts and your sheet of notes when you are presenting your answers, but remember that this is an oral presentation, and not a reading.

Task 3: After you have answered tasks 1 and 2, you will be given a third task by the examiner. This is a purely oral task. You will hear a claim and must then state whether you agree or disagree with it. You must argue your point of view.

You take the test alone, and not together with another candidate. An assessor is not present during the oral test. The examiner records the examination and Skills Norway’s regular assessors subsequently listen to the recording and assess your test. 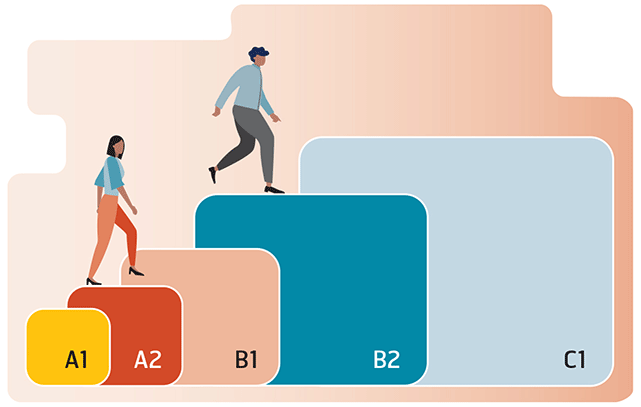 The Test in Norwegian C1 – higher academic level shall measure the second highest level in the Common European Framework of Reference. The scale has six levels, where A1 and A2 belong to the basic level, B1 and B2 come under the independent level, and C1 and C2 represent the proficient level.

Each level also has a designation describing the level. C1 is accompanied by the designation ‘Effective operational proficiency or advanced’ and is described as ‘an advanced level of competence suitable for more complex work and study tasks’.

The level B2, under C1, is required for admission to higher education. At the B2 level, learners achieve a new degree of linguistic awareness and a better overview of their own language learning and mistakes. They can clear up misunderstandings, rewording what they have said and planning what they are going to say and how. They can assert themselves in social situations and argue their points of view effectively.

In other words, the B2 level is a high level, and the C1 level is, as we have seen, even higher. However, people do not fully master the language at the C1 level. They will still make some slip-ups, but the level is so high that they can effortlessly and effectively use the language in most situations. They can express themselves fluently and spontaneously, without much obvious searching for expressions, and they can use language flexibly and effectively for social, academic and professional purposes.

What can you do at C1 level?

At C1 level, you can understand a wide range of demanding, longer texts, and recognise implicit meaning. You can produce clear, well-structured, detailed texts on complex subjects, showing controlled use of sentence patterns, conjunctions and cohesive devices. At C1 level, you can also use the language orally and in writing for cognitively demanding tasks such as processing, summarising and disseminating information in a precise and expedient manner.
.

The test measures language skills at C1 level. It does not contain tasks at other levels, and it is therefore not possible to be awarded a B2 or another lower level – you are either awarded a C1 or you do not pass the test.

C1 is a very high level. It is not the case that everyone who learns a language will be able to attain the highest levels. The content of the C1 test is based on activities and language activities that are common in academia and other arenas with very high requirements of language skills.

The tasks in the C1 test are therefore complex and cognitively demanding. Some of the tasks only examine writing or oral communication, while other tasks examine multiple skills at the same time. This requires the use of receptive skills (reading or listening) along with productive skills (talking or writing) to communicate something. This makes high requirements of both language skills and concentration. It is also the case that the C1 test has few, but comprehensive tasks.

To find how the tests are assessed, see the assessment forms here:

Do you want to practise?
Åpne/Lukk

The Test in Norwegian C1 – higher academic level only measures the C1 level, and you will not achieve any result if you are unable to do the tasks in the test.

Taking a test that is too difficult is not a good experience, and we recommend that you talk to a teacher who is very familiar with the highest levels for guidance about what test level is right for you.

You can also take a test to determine your recommended test level
Temporary technical error: The result of the “Veiledningstest” will be incorrect if you delete an answer without filling in a new answer.

One of the requirements for admission to higher education in Norway is documented Norwegian language skills at level B2 for all parts of the test (in Norwegian).

One of the requirements for admission to higher education in Norway is documented Norwegian language skills at level B2 for all parts of the test (in Norwegian).

The test can be adapted or facilitated in different ways.

You can adjust the volume of headphones and the font size in the test on the computer you use at the test centre. You do not have to apply to do so in advance. You can practise doing the tests to find out how this works in advance. In the test in reading comprehension and oral communication, you can be given a transcript of the reading texts on paper.

If you have impaired sight or hearing, you must apply to the test centre in your municipality to take an adapted test for the hard of hearing or visually impaired.

If you have dyslexia, a speech impediment or trauma issue, you may also be entitled to take an adapted test.

You must contact your test centre as quickly as possible, but within three days of registering for the test at the latest.

You must have a statement from a doctor, psychologist, the Educational and Psychological Counselling Service or a speech therapist, which you enclose with the application for special adaptation.

Special adaptation may take the form of extra time or that you can sit in a separate room while taking the test.

You are not allowed to use any aids during the test. Use or attempted use of such is considered cheating. The following are some examples of cheating:

Cheating and attempted cheating can have the following consequences:

Your work during the written presentation will be logged.

Cheating will be discovered during or after the test, or when it is being marked.

If you are caught cheating you will be issued with a formal decision. You may lodge an appeal against this decision with the local authority.

The texts you write in the written presentation part of the test must be your own work. Copying and plagiarism are considered cheating and are not allowed.

Plagiarism is when you have used all or part of someone else's text, for example, from the internet, textbooks or from other students, and passed it off as your own work. This also applies if you have learned text by heart and use it in your test. If you are found to have plagiarised someone else's work, you will not be told the result of the relevant part of the test.

Forging your test certificate is considered document forgery and can lead to prosecution.

Opening hours for phone and chat:

You can ask us general questions. If you have questions about your test or registration, you will need to contact the test center.
Chat with us

Ask a question on a form (in Norwegian)
Use the form

Your email address and mobile number must be registered by your test centre before you can log in to Min side.

Instructions for Min side (pdf, in Norwegian)